The Gap Between Political Correctness and Reality

The Democratic Party increasingly exhibits traits of a revolutionary party bent on obtaining control over thought and discourse. The potential ability to exercise this kind... Read More The post The Gap Between Political Correctness and Reality appeared first on The Daily Signal. 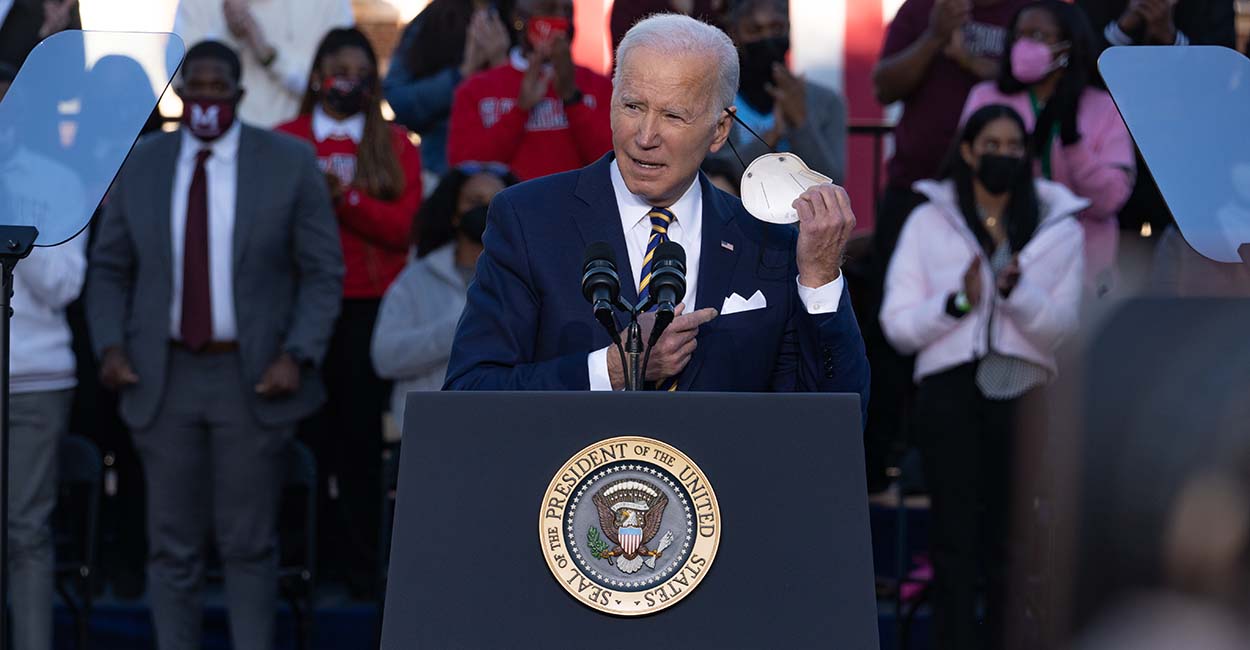 The Democratic Party increasingly exhibits traits of a revolutionary party bent on obtaining control over thought and discourse. The potential ability to exercise this kind of power enables the progressives who run the Democratic Party to inevitably steer the country towards their objectives, having already defined the acceptable bounds of language and debate.

A different path, less violent but no less comprehensive in its aims, was set forward by the Italian communist Antonio Gramsci. His goal was for the left to obtain cultural hegemony by dictating the meaning of words and thus imagination giving the socialist rulers comprehensive power because they controlled people’s minds.

Gramsci did not favor violence and subjugation as Lenin did. Rather, he wanted to form alliances between different groups and factions within society in support of socialist objectives. This was best achieved by a combination of measures, hard and soft, aimed at reworking imagination, thought, and language.

In this way, the socialists would define what is possible. Gramsci did not exactly specify what would be required to do this. In practice, he left open a range of despotic possibilities. His frequent appeals to Machiavelli indicate the state would inevitably loom large in his methods of control.

The late Angelo Codevilla, the brilliant political theorist, who understood our ruling class in masterful fashion, brilliantly unpacked the behavior of progressives in a 2016 essay titled “The Rise of Political Correctness” by pointing out the difference between Lenin and Gramsci’s approaches to gaining power.

Codevilla’s analysis is greatly needed as we confront a Democratic Party that seeks Gramsci’s cultural hegemony but acts positively Leninist towards its opponents, aiming to inter them through aggressive state and corporatist machinations.

In functioning as an ideological party, the party, state, and regime are an interlocking unit that enforces norms, behavior, and thought. The Democratic Party is wedded to a set of ideological propositions that it means to force on the broader population, even at the expense of its electoral prospects.

On Build Back Better, critical race theory, Defund the Police, COVID-19 safety measures, transgender-mania, and the rise of violent crime, public opinion is turning against progressives. Their inability to begin moderating or foregoing these policies speaks to a dogged refusal to give up the progressive dream of reshaping reality by law.

On a national level, many have noted that Democratic representatives in Congress function as if they face no real constraints on their power. The push for vast expansions in spending, green energy regulations, transfer payments, voting reform, among others, would increase state power beyond that achieved by the Great Society. But this is no longer the days of the Johnson administration, and unlike then, Democrats do not run Washington with massive majorities.

Democrats in both the House of Representatives and the Senate currently operate with hair-thin majorities. Rather than moderate their agenda they instead favor large scale reforms reforms as seen in the Build Back Better bill, for example. The Democratic majorities depend on swing-district and swing-state members who cannot afford to support the party’s radical efforts—this similarly does not restrain the leadership of the party. These hard limits on their power have been dismissed.

In this, Democrats in both houses of Congress and in the White House express a firm adherence to their ability to alter reality, to force upon the country sweeping progressive change without taking stock of the means and ends needed for such an achievement.

Perhaps the best evidence is the attempt to nationalize election law in one piece of legislation. State control over election law was a key bargain made in our nation’s founding. The states did not want their rules dictated to them by Washington, and that remains largely true today. Any attempt to change election law by removing the locus of power to Washington would require tremendous power to effect it.

The Democrats obviously are far removed from such a moment.  That their attempts here failed dramatically illustrates the point. The fact that President Joe Biden, among other prominent Democrats, infamously stated that opponents to election law reform were racists, Confederates, and Jim-Crow types, suggests that his own presidency, his conception of statesmanship, is firmly tied to ideology, even above the prospects of a substantive change. Could the end merely be to proclaim ideological superiority over opponents and much of the country?

Surely the answer is no to a question that ignores the realities of competitive party politics. However, we need to drill down to the core of progressivism itself. That core is egalitarianism confirmed by history and instantiated by policy.

Returning to Codevilla’s analysis of political correctness, the point, he says, is to define reality as “the point of the state and progressive party in power.” The progressive, Codevilla argues, is charged with creating new truths and is perpetually “at war against nature’s laws and limits.”

Codevilla’s masterful use of Lenin and Gramsci opens before us both the ends and means of progressivism. Both thinkers mean to rule us for revolutionary ends, the progressive chooses between intentional destruction of opponents via Lenin or the cooptation of them with Gramsci’s redefinition of language.

We might see Democrats using Gramsci’s soft coercion through its ability to tell us what to say and celebrate, but Codevilla sees the party as positively Leninist. America’s constitutional order and its preconditions of limited power, property, family, and civil society, held together by a Judeo-Christian morality must be wiped away.

When Biden excoriated his opponents as racists in his Atlanta speech, including those within his own party who would not end the use of the filibuster, his goal was to treat the party’s ideological interest as a reality “that ranks above reality itself” to use Codevilla’s stirring formulation.

This is the essence of political correctness: the party’s reality is the truth. Biden failed in the short term in this effort, and in his major social spending plans in the Build Back Better bill. But nothing is finally over, the progressives always return.

The progressive dilemma here is that in its perpetual war against nature, reality does not yield. There is always a gap between this reality and progressive political correctness. And in that sense, progressives must embody these realities which is achieved by wielding power over others.

People must be forced to speak and act as if these realities were real. And is the substantive policy goal what really matters, or is what matters the forced affirmance by the wider society of progressive aims? In other words, must we accept that male simulacra of females are really females and permit them in female athletic competitions with predictable results?

The failure to admit this reality results in expulsion from polite society. Or, as Codevilla notes, “cultural hegemony is the goal.”

The new addition to progressive power is its power to enlist corporations in its struggles. The party-state comes to mind as the Democrats use the state to enlist corporations and crucially the tech companies in their favor. You will recall the countless companies who insisted that support for the election reform bill was tantamount to ensuring the right to vote continued for minorities against a recalcitrant Republican party whose state legislative minions were surely angling to take their voting rights away.

Frequently, the Biden White House now makes open appeals to tech companies regarding speech that should be favored or rejected on their platforms. Tech, media companies, and the government increasingly operate in alignment with each other.

Perhaps the longer term thinking of the ideological party is that they can force opinions to change by the incredible nexus of power they hold throughout society. There are few institutions not dominated or heavily influenced by progressive opinion and its favored diktats.

Even if the Democrats lose an election, they are still able to speak into the minds of millions utilizing the federal bureaucracy, corporate media, and supplicant corporations to guarantee them repeated bites at the apple. When they return to power, the groundwork is further made for tremendous change.

On this score, the attempt to centralize election law may have been the attempt of an ideological party to rewrite the rules in its favor precisely as an ideological party, one that knows it can no longer win elections within the coasts, save for major metropolitan areas. As such, the sweeping goal is to break out of this trench warfare. Stalled for now, this legislation will return in subsequent iterations, and the foundation is always being laid.

The opportunity now for opponents of the ideological party is in the massive gap that has opened between political correctness and reality. Americans are not rushing to support the expansive platform of the Democratic Party. They are going to have to be dragooned into it. And the revolutionary party has a strategy to achieve that, one that will force reality through a state-created and Wall Street led green energy economy where we learn that energy is a luxury good.

The education system will ensure that the American founding and its truths are buried by a Marxist inspired pedagogy despite parental resistance because charter schools and educational choice will be curtailed. Voting reform will provide Democrats much more favorable rules for victory. And massive social spending consolidates progressive gains by making even more citizens dependent on government programs.

The moment for conservatives becomes quite clear. Expose the gap between reality and political correctness for what it is, progressive failure to make their preferred reality true. This can only be done with a set of proposals that speaks to the distrust and anxiety Americans have about the current moment by giving them the freedom and confidence to live their lives on their own terms apart from any number of government commands reinforced by corporate and social media.

The failure to do so will lead to the revolutionary party’s ability to consolidate us into their altered reality.

The post The Gap Between Political Correctness and Reality appeared first on The Daily Signal.

‘Too Little, Too Late’: Gov. Kim Reynolds Responds to Biden’s...

Efforts to Bar Members of Congress From Running for Reelection...

How Do You Hire React.js Developers for Your Startup?

React.JS is one of the most used frameworks in mobile and app development. Read...

Gambling is a fun and relaxing way of unwinding after a day's work. With online... NOUBI SAYS: Shopping is an art, it pays to know what you are buying. Even the most...