Russia’s invasion of Ukraine has put politics in the forefront in the pragmatic energy relationship between Germany and Russia, Munich Security Conference Vice President and… Read More »

Russia’s invasion of Ukraine has put politics in the forefront in the pragmatic energy relationship between Germany and Russia, Munich Security Conference Vice President and CEO Benedikt Franke told New Europe in an interview in Greece on April 6.

Russian gas monopoly Gazprom said on April 1 it was quitting its business in Germany and the German government said on April 4 Gazprom Germania, an energy trading, storage, and transmission business will be transferred to Germany’s regulator to ensure energy security.

Asked if this a game changer and politics are now the driving force in the relationship between Berlin and Moscow, Franke said, “You know, behind your question is the assumption that thus far energy policy in Germany has been driven by the business sector which I think is totally true and a valid assumption. Has the war in Ukraine been a game changer and is now politics at the forefront? Yes definitely, and it helps that we have a government partially run by the Green Party that has called for energy transformation for very different reasons for a long time and now two things are coming together,” the Munich Security Conference Vice President and CEO said.

Franke stressed that the green energy transformation and geostrategic need to reduce dependencies and not just dependencies on certain types of energy but on certain energy sources like Russia. “You will see a Germany that is totally determined to reduce its dependency on Russia to zero and that has lost faith in Wandel durch Handel (change through trade) doctrine that we would be able to change Russia through economic ties. We have given up on that and every part of the German society has given up on that so yes is a game changer.

Angela Merkel, during her long term as German Chancellor, always believed that change can be achieved through trade, arguing that this strategy had worked with the former Soviet Union. Franke said Merkel’s effort to export democracy to Russia was a worthwhile attempt. “Now it’s easy to criticize her retrospectively but was it really wrong to try to pull them into the sphere of democracy? I don’t think so but maybe we were a bit too naïve all of us, most of us at least, me included, and we have dropped our guard and now we really need to get back into the game and make some very costly and difficult decisions and take the population along. We can’t do this without the population. We need to explain this to the population because it’s them that will pay for it,” Franke said.

Speaking at the Bundestag on April 6, German Chancellor Olaf Scholz urged the EU to use that momentum to advance climate reforms. Germany, which depends on Russian gas for about 40% of its needs, has decided to wean itself from its reliance on Russia but that cannot happen overnight. “I hope that it won’t take several years but it will not be a thing ‘tomorrow everything will be different,’” Franke said. “But I think the key question is if Russia switches off oil and gas now that will push us in the right way much faster. If they don’t cut it off the change will be slower. So, in my chest there are two hearts beating, one says, ‘Please Russia switch it off, so we don’t have to make that decision and force us to do the right thing’ and the other heart beats for a more considerable slower change,” he added.

Both sides do not want to take the blame cutting off the gas. But it’s getting close, Franke said. “You will see a decision one way or another by the end of next week. I’m 100 percent sure,” he said. 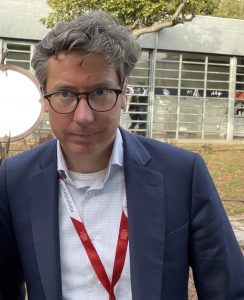 At the Munich Security Conference there was always a concern about Russia and cybersecurity. Asked if what we have seen recently especially with misinformation is this also a game changer in the way Europe and Germany in particular view security, Franke said, “Yes, but I think it has been less than a game changer that we’ve seen on the energy front. We expected Russia’s invasion to be accompanied by harsh cyber war measures. We’ve seen very little. We’ve seen a little bit of disinformation; we’ve seen a little Denial-of-Service (DoS) attack here and there but what we have not seen is what we were afraid might happen: lights and sewage plants in Germany being switched off. So, the question is, is that still coming, or don’t they have the ability that we’ve been led to believe and hence has this maybe been the wrong focus for the last couple of years,” he said.

“I believe that cyber security, protection of critical infrastructure all this is important but what I think is even more important is to increase resilience on all other fronts as well. In a way, we’ve been preparing for the war after next and we haven’t been preparing for kinetic conflict of the old nature and I think we need to put that to the forefront of our thoughts,” Franke said.

After the Ukraine war, Germany has changed its security doctrine and the EU is now trying to become a military as well as an economic power, boosting its security. Asked how optimistic is he that Europe can succeed, the Munich Security Conference Vice President and said, “I’m very optimistic, much more optimistic than I was two-three years ago that Europe will get its act together, that the Russia crisis, the China drama-in-waiting will force us to do the right things and you will see a much more credible, much more united European Union and European continent”.

An American’s journey out of war-torn Ukraine

A LIFETIME EXPERIENCE TRAVEL THROUGH THE RUSSIA

Bank accounts are essential for your business. They help you get paid, pay others,...

The energy price cap will be updated every three months from October under Ofgem...

When Will Big Tech, Big Media Apologize for Lying About,... NOUBI SAYS: We are all a combination of good and not-so-good traits. However, we...